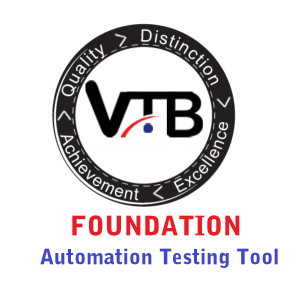 VTB FOUNDATION -AUTOMATION TESTING TOOL CERTIFICATE covers all the essential principles of using the automation testing tool -Selenium IDE and  Selenium Webdriver.
Designed for beginners as well as testers with previous automation experience, it takes the new-comer to Selenium through all the basic and advanced techniques of writing effective automated web tests. Selenium allows both developers and testers to automate tests against applications and execute them against multiple browsers.
Selenium is a very well-know portable software-testing framework for web applications and widely used in New Zealand. Selenium provides a playback  tool for authoring tests without the need to learn a test scripting language. It also provides a test domain-specific language  to write tests in a number of popular programming languages, including Python, C#, Groovy, Java, Perl, PHP, Python, Ruby and Scala. The tests can then run against most modern web browsers. Selenium deploys on Windows, Linux, and macOS platforms.

This certificate aimed at people who are testers, test analysts, test engineers, test consultants, test managers, user acceptance testers and software developers. This is also appropriate for anyone who wants a deeper understanding of automation testing

There are no prerequisites for this Certification. However, we recommend to have at least one of following programming language skill – Python, C#, Groovy, Java, Perl, PHP, Python, Ruby and Scala

Participants need to sit the VTB Foundation exam in order to acquire the certification. The exam format is outlined below:

Participants need to achieve 65% in order to pass the examination